MicroRNAs (miRNAs) constitute a large group of endogenous single stranded small RNAs (19-24 nucleotides) that have negative regulatory function on gene expression. They are processed from longer non-coding RNAs with characteristic fold-back structures by double-strand specific RNases of the Dicer family. Upon processing, they are incorporated in the RNA induced silencing complex RISC by binding to its main component, an Argonaute protein. MiRNAs serve as the specificity components of RISC, since they base-pair to target nucleic acids, mostly mRNAs, in the cytoplasm. Subsequent regulatory events include target mRNA cleavage (often followed by degradation of cleavage products), which is mainly triggered by plant miRNAs, and translational inhibition, as mostly seen in animals. Target sites in plant miRNAs normally share high sequence complementarity to the respective miRNA and are often in coding regions, whereas in animals, target sites are often only partially complementary to their target sites and are mostly located in the 3'UTR of target genes. For further reading, we recommend Bartel (2004), Filipowicz (2005), Chen (2005), Jones-Rhoades et al. (2006) . 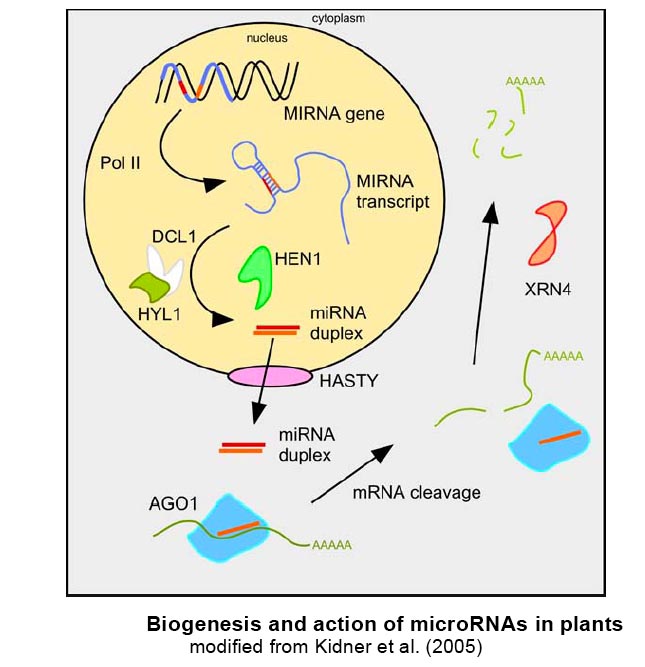 Plant miRNAs negatively regulate their targets (mainly protein-coding transcripts) by cleavage induced degradation. Effects of miRNA overexpression are thus often reflected in decreased mRNA levels of target genes (see Figure A).?In order to describe the full extend of plant miRNA targets, and to determine parameters of target selection, we have monitored genome-wide changes in transcript levels upon miRNA overexpression. Close inspection of genes with up to 5 mismatches to 5 different miRNAs revealed 2 groups: target genes, which are downregulated in miRNA overexpressers, and non-targets, which are not downregulated. Comparing alignments of all those genes to their respective miRNAs allowed us to determine parameters, which discriminate target genes from non-targets. They are summarized in Figure B and also hold true for most other known Arabidopsis miRNA-target pairs.
In animals, miRNAs normally pair to their targets with only limited complementarity, and recent publications support the view that base-pairing to the seed region between miRNA position 2 and 8 is sufficient for target recognition. Animal microRNAs therefore have many targets.

Artificial microRNAs (amiRNAs) are single-stranded 21mer RNAs, which are not normally found in plants and which are processed from endogenous miRNA precursors. Their sequences are designed according to the determinants of plant miRNA target selection, such that the 21mer specifically silences its intended target gene(s).?To compute optimal amiRNA sequences, we developed this WMD tool, which uses your favorite target genes as an input and generates all possible specific amiRNAs. AmiRNAs are required to resemble natural miRNAs by three criteria: they start with a U (found in most plant and animal miRNAs), they display 5' instability relative to their amiRNA* (the nucleotides pairing to themiRNA in the precursor), and their 10th nucleotide is either an A (most favorable according to Reynolds et al. (2004) for artificial siRNAs, and overrepresented in plant miRNAs ( Mallory et al. 2004 )) or an U.
For Arabidopsis, we use the MIR319a precursor to engineer amiRNAs by replacing the original miR319a (> the first 20 nts of the 21mer) with the artificial sequence (21mer), and the miR319a* with a sequence that pairs to the amiRNA with similar structural features than in the endogenous case. Arabidopsis precursors have been successfully used in tomato and tobacco (Alvarez et al 2006) , but we recommend to also test endogenous miRNA precursors from the species of interest for amiRNA engineering, preferentially those of which expression data is already available.
5' instability: Dicer generates small double stranded products with 2 nucleotide long 3' overhangs. One strand represents the miRNA, the other strand is called miRNA*. In the double strand, one end is normally thermodynamically less stable, since it is either mismatched or contains less GC (but more AU) pairs relative to the other end. The strand with lower thermodynamic stability at its 5' end (5' instability) is preferentially incorporated into RISC Khvorova et al. 2003, Schwarz et al. 2003 ).

Since mainly one stable small RNA is generated from a miRNA precursor, silencing via this miRNA is highly sequence specific according to the determinants of plant miRNA target selection. This allows the design of amiRNAs, which silence either single or multiple related target genes. Related genes can also be located next to each other on the same chromosome (tandem repeats), and no other convenient tool exists for simultaneous silencing of these genes. As the recognition element within the target RNA is only very short, amiRNAs can also be utilized to silence specific splice forms of a gene of interest (see Design Guide below). Since miRNAs are single stranded, they mediate strand specific gene silencing. This allows the design of amiRNAs, which can specifically silence only antisense transcripts, which have remained largely unexplored to date. Similar to RNAi, amiRNAs also function in tissue-specific and inducible fashion, and they have only limited non-cell-autonomous effect. Most importantly, amiRNA induced mutants can be complemented by amiRNA resistant targets. Therefore, silent mutations are introduced in the region of amiRNA binding, which disrupt amiRNA mediated degradation. This technique has been first described by Palatnik et al. (2003) for natural miRNA targets.

In Arabidopsis and other plants, directed gene silencing has often been approached by RNAi. Whereas initial experiments using overexpression of antisense transcripts (antisense to the gene which should be silenced) had only limited success, so-called hairpin constructs are now widely used and functional in many cases ( Wesley et al. 2001 For that purpose, 100-800bp fragments of the gene of interest are cloned in both orientations, separated by a loop-forming intron sequence, and expressed in planta. Primary transcripts form a fold-back structure, which is processed by Dicer enzymes into small RNAs. These are then perfectly complementary to the gene of interest and function by cleavage-mediated degradation of the target transcripts (for more information see http://www.pi.csiro.au/rnai/ ). Since transgenes are transcribed into long fold-back RNAs, many small RNAs are formed from one precursor. As the positions of Dicer cleavage are not known, the 5' ends of small RNAs (called siRNAs) are not known. In addition, it remains elusive, which parameters siRNAs use to select their target transcripts. Prediction of small RNA targets other then the perfectly complementary intended targets are therefore very hard to predict. Artificial microRNAs, in contrast, are produced from miRNA precursors, which are normally processed such that preferentially one single stable small RNA is generated. Since the determinants of plant miRNA target selection have been described, the complete spectrum of amiRNA targets is easily predictable. In addition, amiRNA sequences can be optimized for high efficiency, since they are always produced from the same locus in their precursors. Silencing of target genes by RNAi and amiRNAs is very similar and is based on cleavage mediated transcript degradation.

This paragraph describes how to use the WMD Design tool, and also how to proceed after amiRNAs have been designed. If you have never used the tool before, we strongly recommend reading this section!

The follwing list provides a swift overview of the steps involved in amiRNA design: 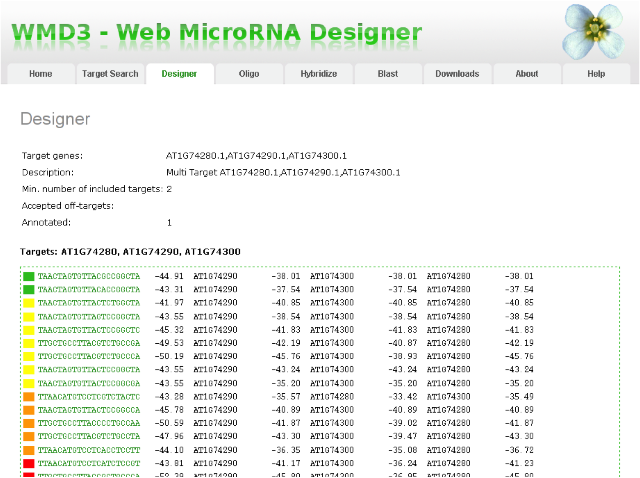 Result page of WMD3 amiRNA Designer: amiRNAs are sorted according to established quality criteria. AmiRNAs at the top of the list are expected to work better in most cases.

There are still some criteria, which have to be considered when choosing the final amiRNA. Most of them have been implemented into the ranking process, and they should be considered here again, especially when multiple genes are targeted simultaneously.
We prefer (not require):


To facilitate the selection of amiRNAs, their sequences are hyperlinked to an alignment to all transcripts in the respective genome release that have up to 5 mismatches. They are sorted by hybridization energy between target gene and amiRNA, and your intended target gene(s) should appear on top of the list. The alignments show the target sequence (5'->3' orientation), the amiRNA as a reverse complement (amiRNA position 1 is on the right side), mismatch patterns (stars indicate matching bases), as well as the relative position of the target site in the transcript. Additional information is given by the hybridization energy between the respective target site and the amiRNA (should be as higher as possible in all genes which are not intended targets relative to the intended target), and the indication why a transcript has been rejected as a target gene (red bar).

Once selected, the amiRNA sequence needs to be engineered into an endogenous microRNA precursor for expression. We provide the "Oligo" tool, which designs primer for the Arabidopsis thaliana MIR319a (ath-miR319a) and Oryza sativa MIR528 (osa-miR528) precursors. You simply have to paste your amiRNA sequence and retrieve 4 oligo sequences (they are in 5'->3' orientation already), which are used for site-directed mutagenesis (see below). They retain structural features in the respective MIRNA precursors. For historical reasons, in the case of the ath-miR319a, we replace a 20mer, which was originally thought to represent ath-miR319a (we now know that it is rather preferentially 21nt long) by a 21nt sequence, thereby adding 1 pairing base at the bottom of the MIRNA stem. This does not interfere with miRNA production.

TargetSearch is based on GenomeMapper, a short sequence alignment tool developed for the 1001 genomes project: http://www.1001genomes.org 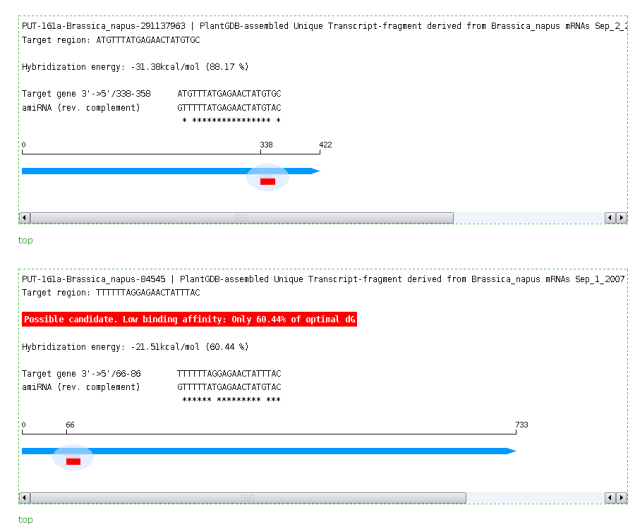 Output of WMD3 TargetSearch: Alignment of amiRNA against target mRNA,position of target site in the mRNA and free hybridization energy.